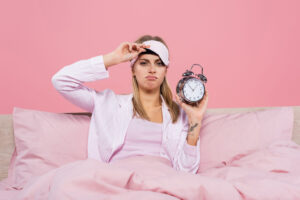 Very often, due to work and leisure, people reduce the number of hours that should be allocated to sleep.

In the world, this is considered a normal trend. In addition, most people do not see anything wrong with this, they consider it the norm.

Do you know the consequences of lack of sleep?

During sleep, the body restores itself, getting rid of muscle tension caused by stress during the day’s activity.

Therefore, one of the consequences of lack of sleep is the appearance of stress, the level of which gradually increases. Therefore, every day it becomes more and more difficult to make decisions and solve daily problems and difficulties.

The connection between mind and body is very strong. If you don’t de-stress and don’t get enough sleep, you’ll be in a constant state of anxiety.

Anxiety can also occur due to the chronic release of adrenaline. This is a common occurrence among sleep-deprived people.

In this case, the connection between neurons that are responsible for mood is weakened.

Therefore, whenever you are depressed or just in a bad mood, remember how many hours you slept.

Even if it is hard to believe, the quality of sleep directly affects the ability to think and learn. Another consequence of lack of sleep is a violation of cognitive processes.

If you sleep less than 7 hours a day, attention, vigilance, and the ability to think and solve problems are impaired.

For this reason, the memorization process slows down significantly.

Sleep patterns play an important role in improving memory. If you don’t get enough sleep, you won’t be able to remember what you’ve learned.

If there is not enough sleep, the level of ghrelin increases and leptin decreases. Because of this, there are favorable conditions for gaining excess weight.

People who don’t get enough sleep are more likely to not exercise due to fatigue. These people tend to eat foods that are rich in saturated fat and sugar.

If these reasons are not enough for you to understand that lack of sleep hurts health, let’s mention one more. Heart health is also affected. If you sleep only 5-6 hours a day, blood pressure rises.

5. Problems with the immune system

During sleep, the immune system produces protective cytokines, antibodies, and infection-fighting cells. This is extremely important for fighting bacteria and viruses.

One of the consequences of lack of sleep is the inability of the immune system to restore its strength.

In case of lack of sleep, the body will most likely not be able to fight infections, so you will get sick more often.

With a poor sleep regime, the risk of developing chronic diseases increases. Among them, we can mention diabetes of various types, as well as cardiovascular diseases.

Bags under eyes are another consequence of lack of sleep. If you sleep less than 6 hours a day, then a lot of cortisol – the stress hormone – is released.

Women who don’t sleep enough usually show wrinkles, which is a sign of premature aging of the skin.

Cortisol in large quantities destroys collagen. Due to this, the skin loses its elasticity, healthy appearance, and smoothness.

Do you want the skin to have a healthy look, but you do not get the desired result, by using creams and various cosmetic products? Maybe you just need to sleep more and go to bed on time.

Avoid the effects of sleep deprivation

If you’re one of those who don’t get enough sleep, you may have already experienced some of the effects of a poor sleep pattern.

If you want to overcome this problem, change your habits. You will definitely feel the difference.