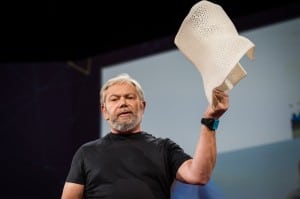 3D printing is still a relatively new concept to most people, but Avi Reichental clearly isn’t one of them. He’s the president (as well as the CEO) of 3D Systems, which is one of the largest companies when it comes to the 3D printing industry in the world. Digital craftsmanship (which is 3D printing in smarter terms, if you weren’t sure) is the way of the future, and Ari is trying to make sure that people understand that. He was the first person (well, he and his team) to create a 3D printed shoe in memory of those who fell during the holocaust. It’s one of those things that really plucks at your heart strings, because just about everybody knows how sick and cruel the holocaust actually was. It’s all for a good cause in the end, so it’s nothing to get caught up in negative spirits about, but that’s something that really hit home with me for sure. That’s not the only interesting thing about these shoes, because he actually conducted in his TED speech wearing them, making an even stronger remark on the fact the holocaust had a lasting impact on his family. 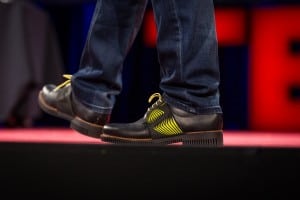 different means, and another neat trait about the entire ordeal is that it only took 3D systems two weeks to go from the designing process to actually printing the shoe. That kind of turnaround is simply unheard of when it comes to 3D printing, but they managed it and that’s obviously one thing that stunned a few people. The shoes consist of very technical materials that are kind of hard to say, the sole is made up of SLS (Selective Laser Sintering) which is the easiest way to produce durable parts through 3D printing.

This unique process is breaking barriers down every single day, and every single time somebody creates a new design we’re getting closer and closer to perfecting a manufacturing process that doesn’t use a lot of resources. If there’s one thing we need to conserve as the human race it’s resources, and 3D printing seems like it’s a step in the right direction if you ask me! Everybody has their own opinion on the matter, but once you’ve seen 3D printing change lives for yourself (much like I have) you’d probably flip the switch.