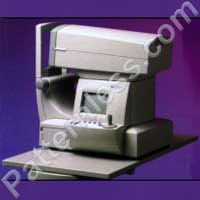 It can be called an autorefractor or an automated refractor but though most people have used one few know what it is apart from ophalmologists and optometrists. They are in short though tools for automatically testing and recording the quality of your eyesight.

An autorefractor will commonly be used by an optometrist to measure the way your eyes refract light and from recording this the machine can calculate whether you are short or long sighted and to what extent, or maybe your sight is perfect?

The first autorefractor was developed in the 1970s and the time they saved meant they soon became highly popular with optometrists and as portable devises to use in remote areas.

The optometrist asks the patient being tested to take a seat and put their chin on a rest to make sure their head is in position, though further adjustment will be needed to align the machine the patient looks at an image in front of them and the machine is aligned based on this. The test itself though only takes a few seconds; with the light being shone into the eye and then the machine recording the angle at which it is refracted back, the light and recording device being placed separately to avoid reflections that might skew results. Each eye is done separately as often a person’s eyes will have different results.

The autorefractor creates a detailed printout or sends information to a screen once the test is done and this then gives the optician a starting point for a further test where the optometrist will try different lenses to see which increase the patients vision, after this the optometrist can advice the patient on whether they need glasses or contact lenses and if so create a prescription based on which lenses improved their vision most of all.

Before autorefractors opticians would have to try a much wider range of lens to find those that would suit a patient, this made optometry appointments much longer and more expensive; there is also the problem with tests that need feedback from the customer that they may give inaccurate answers, especially with very young children. A modern eye exam can be done in around ten to 15 minutes using machines such as the auto refractor making eye tests affordable to all with even free eye tests common.

With a portable autorefractor optometrists can go to remote or poor communities to perform quick and effective eye exams on large numbers of people and transform the lives of those who need glasses but don’t have them; several charities fund this work and glasses for those who cannot afford them and donation of second hand glasses is also increasingly common.

Other advantages of the auto-refractor is that it doesn’t require the pupils to be dilated as with some equipment for automatically measuring people’s eyes. Dilation usually uses bright lights or eye drops that many find unpleasant and which mean that a patient may have to wait in the dark or with sunglasses on until their eyes return to normal, which with the drops can take some time.