Among the ornaments presented by the sea, the coral is on the list of the most valuable. Petrified formations built by invertebrate polyps form long reefs and even entire coral islands in warm seas. 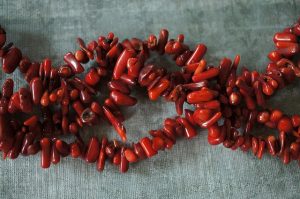 Image by Starbright {link to https://pixabay.com/en/users/starbright-783939/}.

Coral consist of solid aragonites or calcites. Their hardness on the Mohs scale corresponds to 3.5 – 4 units. Untreated, they have a matte shine, can have spots, cracks, pores. Glass shine appears only after polishing the surface. The natural coral is more valuable, the less natural defects and even coloring on it. The characteristic properties of corals are vulnerability to high temperatures and acids.

Coral formations are based on a stump with multiple branches. But not all coral branches are suitable for jewelry processing. Many have too small a thickness and density of the material. Suitable parts of corals, are processed, as a rule, in the form of an oval, a ball or cabochon.

Types of corals and colors

In thousands, the number of varieties of corals is calculated. The principle of their classification is based on color differences and the geography of the distribution of sprouting. Only shades of color in corals are about 350.

Their coloration, in the first place, affects the ratio of organic and inorganic substances in the composition. Organics can range from 1% to almost 100% of coral formation. The most organic black coral is highly valued, but is listed in the Red Book and not produced industrially. And earlier, and now in price red and pink corals. White and white with pink inclusions are also highly appreciated. The most rare are the blue corals. 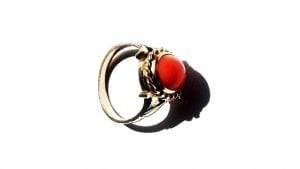 Products from coral have always been very popular – first as amulets, symbols. Then, its decorative qualities were evaluated, and coral beads, rings, earrings, necklaces, diadems with coral insets received timeless recognition among women from different countries with a variety of cultural traditions. To create jewelry and jewelry, corals are most often mined in rich red tones.

Noble corals “live” in the seas, forming bushes at a depth of 3 to 5 meters. The extracted raw material is cleaned of soft parts, then sorted according to quality, thickness of the branch, color and the presence of defects.

Currently, the most active mining of corals is in the Mediterranean Sea, off the coast of Algeria and Tunisia, western Italy, the islands of Corsica, Sardinia, Sicily. Reefs here grow on a rocky bottom, often under the overhanging rock formations, and their branches are turned down. Algerian corals are valued higher among the rest of this group, since the least amount of waste is treated with them.

Corals can be found in practically all warm seas in places where the water temperature does not drop below 21 ° C and the conditions for the life of polyps are maintained. Along the Malaysian archipelago, in the Red Sea and off the coast of western India, the most expensive black corals of Akbar are mined. Near Africa and the islands of Samoa grow red, purple and blue corals. In Japan, Moro dark coral beetles and pale pink bees, which differ from the Mediterranean thick branches and the size of bushes.

Corals were given their own importance in different cultures, but amulets and amulets were highly appreciated from everywhere. It is believed that the fashion for wearing coral items was asked by representatives of Celtic tribes, although pink beads were found in the parking lot, which is still related to the Paleolithic.

Whose stone is a coral – a horoscope, a zodiac sign

According to horoscopes, corals fit all the signs of the Zodiac without exception and have no contraindications. The strongest positive influence they have on people born under the signs of Pisces, Aries, Virgo, Scorpio and Sagittarius.

The undeniable therapeutic properties of corals are based on their composition. In them, in addition to the main element – calcium, contains a large number of microelements, important for the human body, including iodine.

Powder from corals has long been used in medicine to restore the bone system, treat thyroid diseases and diseases associated with irregularities in its work.