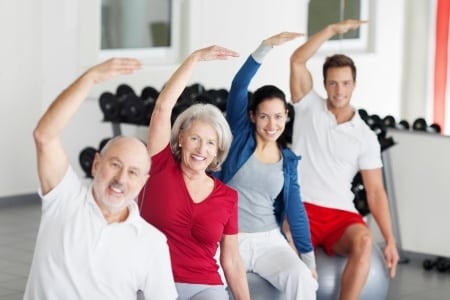 No matter how you do it, may it begin today or tomorrow, exercise – on a regular basis has been proven to significantly prevent many common illnesses and diseases associated with aging. In particular, a research study conducted by Nathan LeBrasseur, Ph.D., (director of the Center on Aging’s Healthy and Independent Living Program) demonstrated that many premature senescent, and senescent cells in general can be prevented or altered at one stage or another through the course of improving ones health.

Physical fitness or exercise, big or small, has been proven to directly impact the likelihood of developing diabetes, heart problems, high blood pressure, and many other diseases or illness – regardless of age in many instances. In fact, too much of salt or sugar can accelerated, trigger a predisposition to, or create Diabetes 2 itself in many individuals through abusive dieting and a lack of overall care to one’s health.

Dr. LeBrasseur has found that obesity as it understandably involves the blockage of the heart and cardiovascular functioning, plays a direct role on the likelihood of heart-attacks – including in those whom are of a younger age. Ultimately, obesity and unhealthy weight gain play heavy roles in blocking your organs and disrupting their functions by sprawling fat everywhere internally. Unhealthy and unwanted fat – especially around the waistline – ultimately make you more susceptible to many common diseases or illness.

The presence and every-developing stages of senescent cells, as outlined by Dr. LeBrasseur, blatantly outline the from-birth, continuously developing hazards and what many might consider to be genetic-based developing illnesses.

Although the projection of lifespan for many Americans in today’s world, in particular men, has continued to drop substantially in numbers, growing older is by no means a deaths-sentence. In fact, according to Dr. LeBrasseur’s experiments, it was demonstrated that test-subjects (mice) responded quite positively and experienced substantial health in less than a half of year when exposed to exercise routines or accessibility. For both test-groups, including one that already was on a healthy diet regime, substantial improvement was reflected – in turn, hypothetically deteriorating the likelihood, or at least early onset of many common illnesses that are generally associated with aging.

On a molecular level it’s shown that individuals are indeed biologically prone to, or perhaps as some would coin it ‘inevitably’ destined for, age-related illnesses or diseases such as blindness and Alzheimers. However, it should rather be appreciated instead of how individuals often incur these diseases, by what age, and what the common variables are or why individuals might think this is the case. It’s not necessarily related to aging as much as it is self-care. Therefore, people are better off giving themselves the opportunity and benefit of the doubt by instead refocusing on a better diet and exercise routine to improve their health.
Exercise not only improves your overall health, muscle growth, development, and mass – but it also helps guide, support, and strengthen both your body and mind for a healthier, longer future for you and your life.

Tony Rollan is a professional blogger who has worked in fitness and alternative medicine for the last five years.  He currently writes for Fitness 360 and recommends them as everyday fitness and workout gym in Clearwater and Largo FL area.