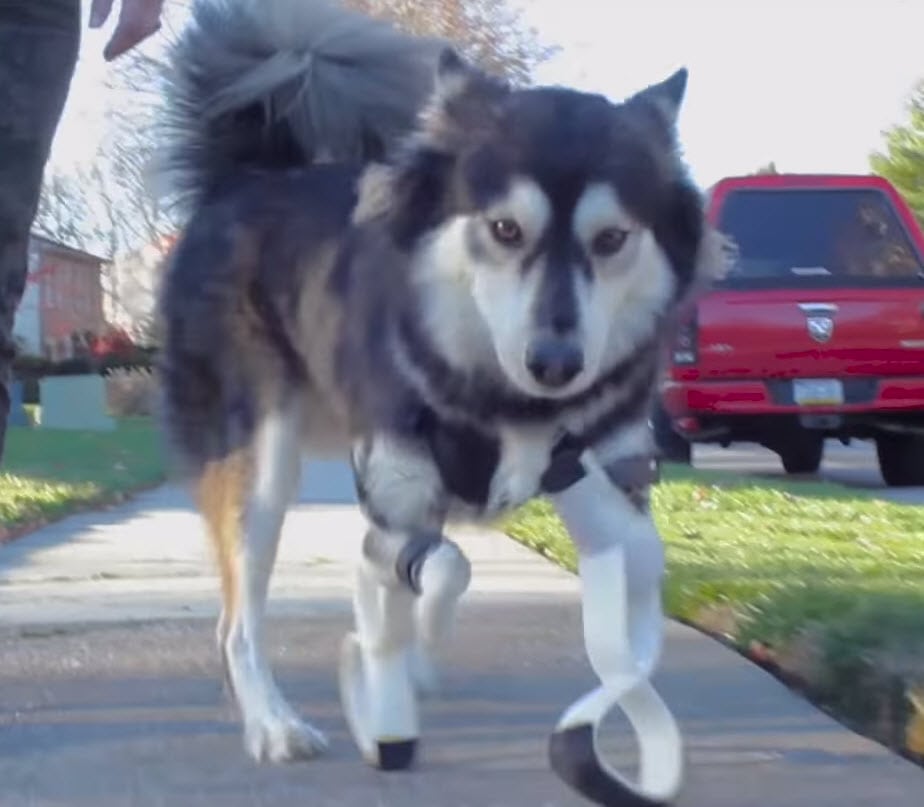 Today’s 3D printing technology is growing at an incredibly rapid pace. From toys now being able to be created and printed at a fraction of comparable major name store costs or outlets such as Wal-Mart, to weapon technology, and now prosthetic limbs!

A most recent project, conducted by Rockhill 3D Systems in North Carolina coined “The Derby Project” provided not one, but two sets of prosthetic legs for a K-9 whom genetically did not grow out his front two paws and was otherwise unable to regularly walk, stand, or run without such an innovation and physical support.

While the first Derby Project proved effective but undesirable due to not assuring Derby an up-right enough position, Rockhill 3-D systems created a second pair, with knee-joint like capacity and structure, with hard industrial grade plastic in which were designed to enforce the equivalent height of his rear legs so that each pair were matching in size and ultimately “strength”.

Given the incredibly swift pace of continued 3D printing technology, especially in places like China, many industries are intimidated as now houses too are being proven to be successfully built (produced) using CNC-like cutting industrial-sized machines through the usage of alternative materials—although comparable if not superior in strength and reliability when comparing them to stone, brick, and other types of concrete and even metal foundations.

Although 3D printing technology is still considerably relatively “new”, they are becoming more and more affordable and desirable for various projects! In fact, it’s anticipated within the next 3-5 years that (mobile) 3-D printers will be a must-have for many mechanics and construction workers or laborers as they can build much needed parts—and even tools—while on the go or at a project site, often within under an hour for small projects and under a day for larger projects!

The creation of 3-D tools, products, and many other miscellaneous projects rely heavily on preprogrammed 3D printing schematics or “blue-prints” commonly available for free or at extremely affordable costs via the internet—at any time! Many 3D printers also have Wi-Fi and Bluetooth capabilities to receive such vital digital data with desirably efficient—and competitive—speed.

In other recent news, 3-D printers continue to grow and show more and more their capacity for mass-producing of reliable, safe, convenient, and even comfortable furniture products! People crave technology and the ability to create their own products because it allows them to have the ability to ‘customize’ whatever it is they’re looking to create, allowing them to custom-tailor every inch, shape, design, corner, and even color!

As of recently, Home Depot recently started aggressively marketing a fairly “simple” yet very durable and reliable 3-D printer for under $400 for printing and making toys, alternative tools, and other forms of foundation (manufacturer grade) materials for taking to, from, or installing at job-sites. Considering the more frequent use of “cheaper” materials in most modern construction, people are turning to 3D printing as a more practical, customizable, and trustworthy solution.

The question of “how” seems to be much less likely in comparison to “when” 3D printing technology will cross-advance and be recognized on a consistent globally reliable level for industrial-grade construction and usage!