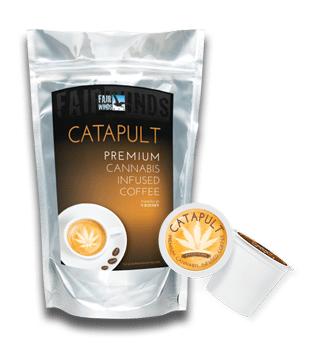 In light of the surge in marijuana legalization across the country, more and more foodies and restaurateurs are experimenting with the popular drug in order to develop new niches worth potential millions. James Hull is a horticulturist who is trying his hand at making it big in the new economy with his new product, Catapult, a marijuana-infused coffee which attempts to combine the relaxing effects of THC with the stimulant aspects of caffeine. Hull and his company are based in Seattle, a major coffee leader in the world and also within a state that has legalized medicinal marijuana, Washington.

The company, called Fairwinds Mfg., was self-funded by the entrepreneur and grows its own marijuana plants using the latest technology. A plethora of technological systems help regulate the growing facility in order to ensure the right conditions for optimal marijuana growth. A team of ten employees helps maintain the complex systems and keeps things going.

The company buys fair trade coffee from local roasters and then infuses the beans with oils from the plants grown in-house. The Sativa strain is what Fairwinds uses; Hull feels that it is a nice combination with the coffee. They are also working on a decaffeinated option which will use the Indica strain and gives the consumer more of a relaxing effect. Each cup of coffee contains about 10mg of THC, which is equivalent to one dose as per Washington state law.

Hull stresses that this coffee is more for recreational use and should not be seen as a replacement for traditional coffee which busy working people often consume for extra energy. Being a drug and considering the psychotropic effects of marijuana, users may be deemed under the influence when drinking the coffee and too impaired to drive or do certain other activities.

Catapult comes in a ground coffee form as well as in pods for use in Keurig or similar machines. It can also be bought at various pot shops around the area. Hull hopes to become the go-to brand when it comes to marijuana-infused coffee much like Starbucks is often the go-to in traditional coffee. The business does face some obstacles due to the Federal government’s laws which still have not legalized marijuana. Because of that, the company cannot sell the product across state lines and it also faces a number of accounting and tax disadvantages due to the Federal government’s lack of recognition of its business. Nonetheless, Hull like many other entrepreneurs in Washington and beyond think that it is worth it and the investment will eventually pay off as more states move towards similar policies and potentially drive a change in Federal opinion.

Hull may be on to something, but in order for this to spread, someone else will have to make marijuana-infused coffee a thing in each state that has legalized the drug. It may be the start of something great or something that may flop, time will tell, but for weed and coffee enthusiasts, it certainly tickles an interesting area of the palate.