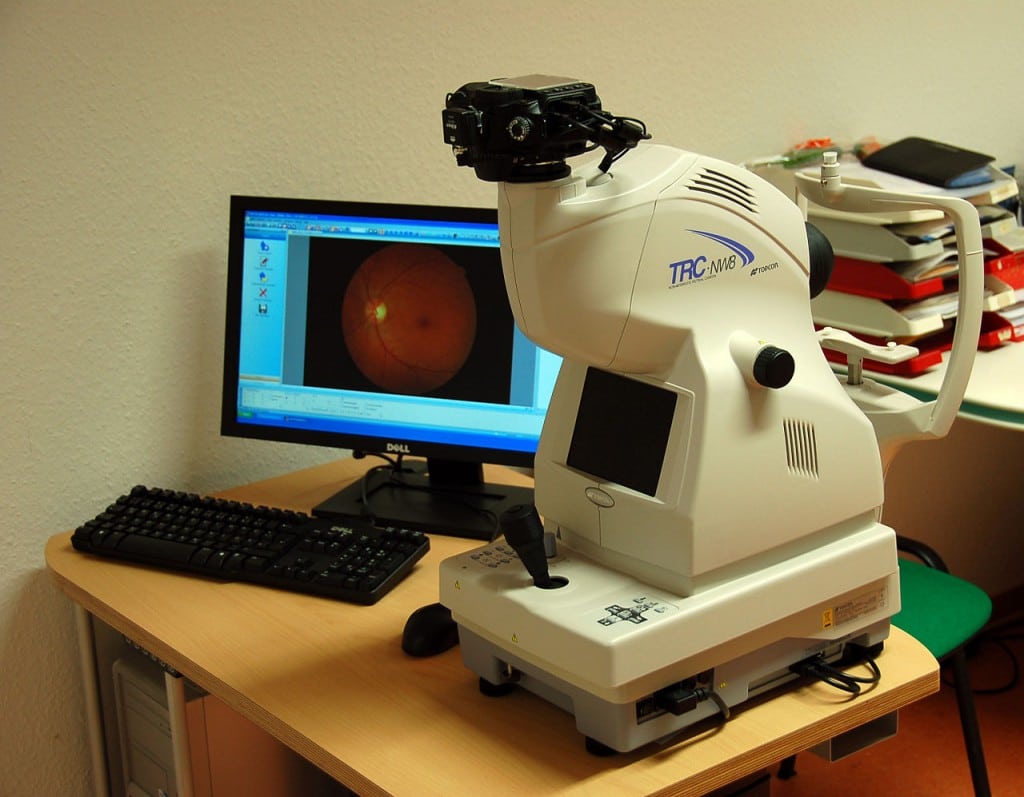 Fundus Photography is the process of creating images of the internal surface of the human eye. It is also known as Fundography. The procedure derives its name from fundus, which is the term that denotes posterior pole. Fundus imaging encompasses macula, optic disk and retina.

Ophthalmologists, optometrists and medical professional trained to carry out the procedure use fundus camera to diagnose disease with the help of retinal angiography and monitor the progression of optic diseases as well as in epidemiology and screening programmes.

Generally, a considerably larger device is used for fundus photography in comparison to ophthalmoscopy. However, it offers a significant advantage. The image captured by fundus cameras can be made available to a specialist for examination at a different time and/or location. It also facilitates photo documentation for future reference. The latest fundus cameras can generally capture considerably larger images of the fundus in comparison to the handheld ophthalmoscopes.

A fundus camera is the main requirement for fundus photography. It consists of a specially developed low power microscope and a camera attached to it.

The fundamental of monocular indirect ophthalmoscopy is the basis of fundus cameras optic design. A magnified and upright image of the fundus can be captured with fundus cameras. A regular camera can view 30° – 50° of the retinal area with 2.5 times of magnifying capacity. The magnifying capacity can be enhanced from 15 to 140 with the help of auxiliary or wide angle lens. Even 15% enhancement increases the magnification two folds.

Like in case of an indirect ophthalmoscope, the optical components of fundus cameras are also arranged to make illumination systems and observation follow dissimilar paths. The light focussed for observation passes via an array of lenses, a ring shaped aperture, a central aperture and the objective lens of the camera before reflecting on retina through the cornea. The reflected rays pass through the hole in the ring created due to the illumination system.

The independent paths of the incident and the reflected beams cause minimal reflection as the light is captured as image. The reflected rays move towards the telescope. Flash bulb light passes into the eye as illumination system path is interrupted by a mirror in the process of capturing the image. Another mirror simultaneously falls in front of the telescope to redirect the rays onto the capturing surface.

Fundus cameras are complex instruments. So, they are manufactured by only top companies such caas CenterVue, CSO, Nidek, Canon, Zeiss and Topcon.

Fundus photography is required for the detection and evaluation of glaucoma and retinal detachment symptoms. It is used to find papilledema in patients who suffer from headaches. The find may indicate brain tumour, benign intracranial hypertension and hydrocephalus, which increase the intracranial pressure (ICP). Glaucoma is detected if the optic disks appear cupped.

Annual or half-yearly fundus examination of diabetic patients is important for screening of diabetic retinopathy since retinal laser treatment can prevent loss of vision due to diabetes. Cerebrovascular accidents can be detected with the help of fundus photography.